Spring property season started with mixed results. Many $2m+ properties passed in, whilst the first home buyer and lower priced investment properties performed strongly along with the second home market sub $1.5m also performing well. 100 Little Charles Street Abbottsford is a 300sqm land site and attracted three bidders and fetched $1.26 million. A run-down house in Fitzroy went $307,000 past it’s reserve, with an amazing 130 bids to sell for $1.757m, so some surprising sales results to start spring in Melbourne.

For the first weekend of Spring property season according to REIV, Melbourne achieved a 61% clearance rate. There were 611 auctions held this weekend, with 296 sold at auction and 236 being passed in, 126 of those on a vendor bid. There were also an additional 165 private sales reported. The overall fall in prices for houses and apartments during the past 12 months has been less than 1 per cent, from June 2017 to June 2018 according to analysis by CoreLogic.

With harder to find quality stock on the market, some buyers are finding themselves emotionally attached to a property, but worried about being the odd-person-out at auctions not knowing enough about the market conditions to know when to bid and when not to. The fear of overspending is now greater than the fear of missing out, that is until they failed to bid and then enter an auction after the auction with the lack of transparency. We have seen a few properties selling well beyond the reserve, in extremely contested auctions…but these contested auctions are in the lower price points or in suburbs with high income capacity above the average property prices, and predominately owner occupier buyers who are still accessing cheap funds from the banks. 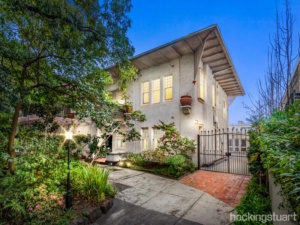 A gorgeous land mark Toorak mansion apartment, one hundred years old this year, and with heritage listing, went under the hammer in front of a cool crowd of about 40 onlookers. Bidding opened at $1.15m and was quickly rebuffed with a vendor bid of $1.2m. The bidder was happy to provide a rise of another $20k but it stalled from there. After the auctioneer referred inside with his vendor it was on. Another bidder jumped in at $1.24m, and the initial bidder went momentarily into seclusion. A third bidder then entered the fray and spirited bidding ensued until the third bidder ran away with the keys at a healthy $1.374m. Quote range was $1.2m-$1.3m. It was on the market at $1.32m. 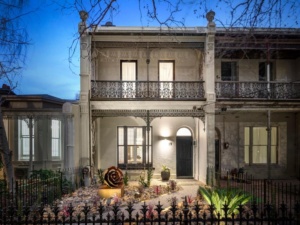 This Beautiful terrace in the heart of St Kilda, at the crest of the hill connecting Fitzroy street and Acland Street has been meticulously renovated and extended to offer magnificently proportioned light-filled living and entertaining areas, and has a west facing rear garden. With a crowd of around 50 or more, the bidding started on a vendor bid of $2,250,000 and the auctioneer tried to encourage bidding from a reported 4-5 interested parties to bid but no one was willing to put up their hand so the auctioneer passed the property in on the one and only Vendor Bid of $2.250. 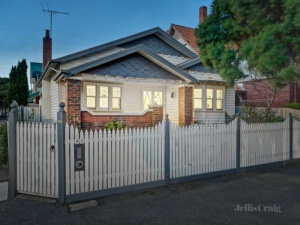 In Brunswick, a three-bedroom California Bungalow sold post-auction after passing in with four bids, split between the vendor and one registered bidder. With Generous bedrooms sizes and access to a stylish bathroom, the lounge boasted an ornate fireplace and elegant leadlight bay window while the kitchen/meals domain incorporates a charming window seat which overlooks the covered north facing alfresco deck. Bidding opened at $1 million, and the property passed in at $1,055,000. The sole bidder later bought 42 Macfarlane Street for the $1.1 million reserve.